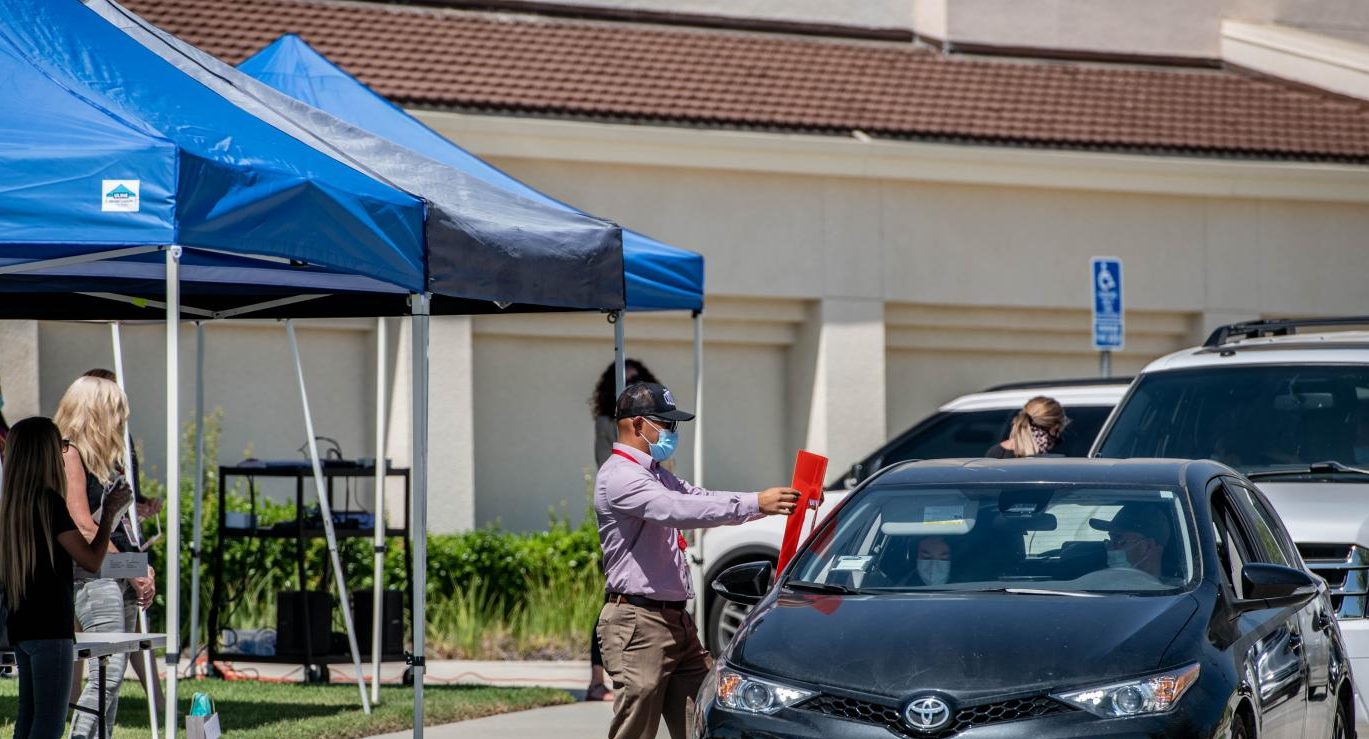 Day Creek Intermediate holds a drive-thru for Student of the Month. (Mark G. )

Day Creek Intermediate holds a drive-thru for Student of the Month.

Student of the Month Drive-Thru for August 2020

Student of the Month: Twins’ Perspective 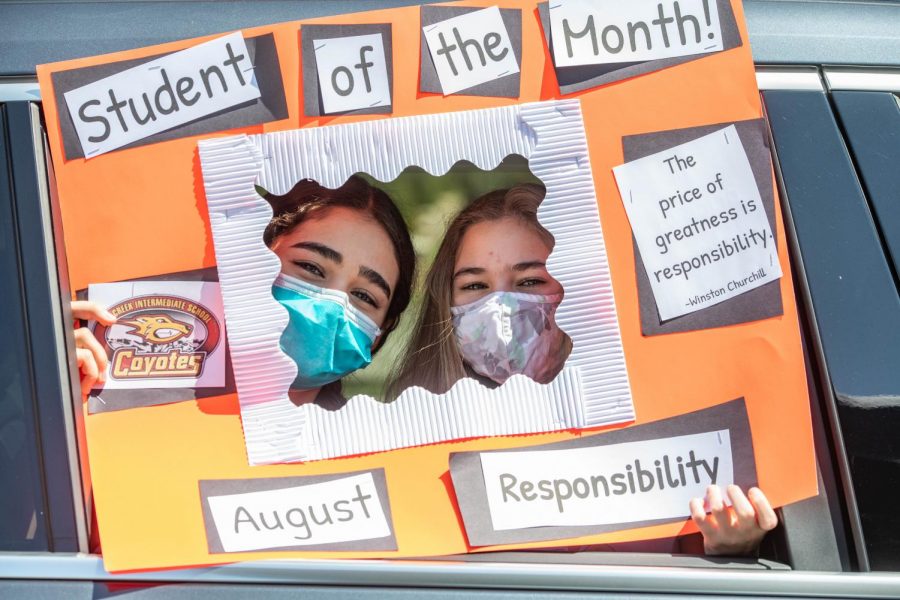 Twins Lina and Jenna A. both are awarded Student of the Month at the same time.

Imagine having someone who shares many of the intricacies of your life. They have birthday, share your room, and occupy the same grade level on your campus. Since Day 1, twins’ lives are fully connected. From that first cry, each will always be associated with a twin brother or sister, something unique to about 1 in 250 pregnancies.

Bonds between siblings are valuable indeed, but the bond twins share is unique, because living through the nearly identical circumstances is something most won’t understand.

But there are also unspoken challenges to the scenario. Picture having someone regularly lurking in your shadow, drawing ongoing comparisons. Imagine being held to similar standards simply by sharing a birthday. Lina and Jenna A., two eighth-graders at Day Creek Intermediate School, have experienced these feelings for as long as they can remember.

Yet both were surprised when they received the identical award during the same month from their teachers. On Tuesday, each was honored with a Student of the Month Award for Responsibility during the month of August.

“Finding out we both got Student of the Month was pretty surprising. Especially since only a handful of kids get it, and we both happened to get chosen,” said Jenna.

Jenna had texted Lina upon finding out she’d earned her award. Lina did not know that she would receive the same recognition later that day.

This was a unique moment for both girls. But what if only one of them had been recognized for Day Creek’s Responsibility SOTM award? This is one of those cons, as twins often compete without even realizing that it’s a competition.

“It’s hard to have a twin shadowing me because Lina has always been a bit smarter than me. Although we both get high honor roll, people would still compare us, such as students in our grade, friends, and sometimes teachers,” said Jenna.

But with these twins, supporting each other comes first no matter the circumstances.

“To me, I wouldn’t mind if she got an award and I didn’t. It’s happened before over the past two years, and it doesn’t affect me at all. No matter how competitive we are, I would still be proud of her for receiving an award,” said Lina.

Family support is invaluable, particularly in times like these. Each of us hopes for that confirmation home, in times of hardship or simplicity. As twins, Lina and Jenna are confident that they can count on each other, regardless of which sister is honored in her moment.

“A great thing about having a twin sister is that we are able to have a very special bond and will be there for each other no matter what,” said Lina. 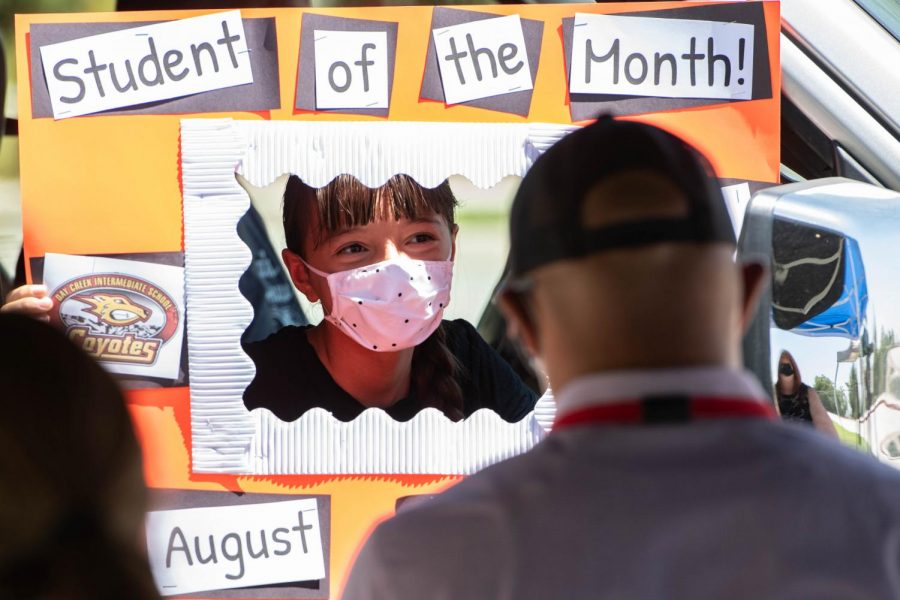 Olivia G. describes how it feels to get SOTM with also having seven siblings.

Cars roll up to Day Creek Intermediate School’s driveway in front of the school gates. Children fill passenger seats, faces smushed against the glass, eagerly awaiting to receive the awards, boxes of Chik-fil-A, and warm greetings from their principals and teachers for their hard work this month.

This isn’t something that would normally occur. Usually it’s the standard pizza party that’s coordinated to celebrate the achievements for a child in a typical household of fewer than three.

Now imagine rolling up as a member of a family of nine. That is the reality for Olivia G., a seventh grader at Day Creek Intermediate School. She is one of seven kids in this family to achieve Student of the Month. Having several siblings may be fun, but in a family of nine, it also means high expectations.

“It pushes me to my best because other (siblings in my family) have gotten that so I want to get it (SOTM) too!” said Olivia.

As one of seven siblings, it’s a norm to share food, space and parent’s attention.

“It’s really chaotic,” Olivia said. Having a large family can be hectic at times, but it also makes her try harder.

“It feels great and also it pushes me to do my best,” said Olivia.

Olivia was thrilled to be chosen for Student of the Month. “I was really excited and happy because since quarantine, it’s really hard now to communicate with your teachers, so I was excited.”

Since this was something she had worked toward, it made all the difference when contributing to her joy of getting S.O.T.M.

“I worked towards it by being the best I could and by working to be great in my classes. Even during quarantine, I felt even prouder when I got it,” Olivia said.

Student of the Month: A Teacher’s Perspective 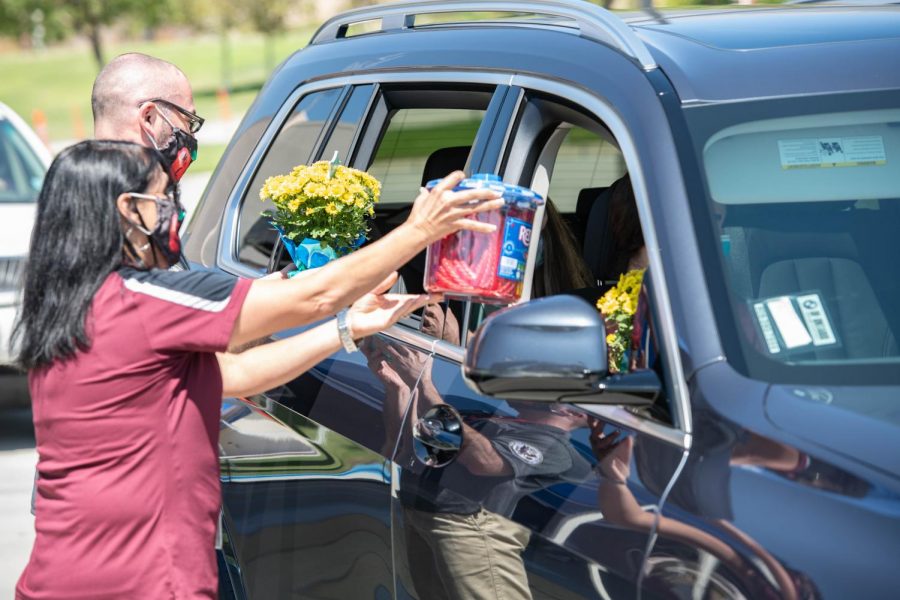 The August SOTM drive-thru was a way for teachers to see and honor their students while being safe.

Have you ever wondered what it is like to meet your students through a car window? Since COVID-19 has shut down schools for the time being, Day Creek Intermediate School has found a way to be a part of students’ lives and celebrate a job well done while still being safe. DCIS held a drive-thru for students who were rewarded Student of the Month for August.

Parents and their children drove up to the school and were greeted by smiling staff members. Though the students might have thought they were simply coming to get a box of Chick-fil-A, the staff saw it as much more than that. Many of the teachers hadn’t seen any kids on campus since March, so it was a special experience to see students smiling as they were awarded SOTM.

“(After) campus was closed last year on Friday, March 13th, it has been quite the peculiar experience to celebrate student achievements without any students on campus. This was a special treat not only for the students, but also for all of the teachers that miss seeing kids on our beautiful Day Creek campus,” said eighth-grade teacher Mrs. Schemenauer.

Students are learning virtually from home at the moment, but most of the staff are teaching from their classrooms. Hallways are silent, classrooms are empty, and the cafeterias is deserted. School just isn’t the same.

The teachers and administration took some time away from their desks to meet their students and offer congratulations. Some teachers even made signs or gave flowers and candy to their hard working pupils.

While interactions were plenty, there was obvious intent to follow school and state safety standards. Students and staff wore masks and kept a safe distance from each other.

“We are following the rules for the mandated ‘virtual’ learning. One of Day Creek’s slogans is ‘safety first’ so we are trying to stay safe and follow the rules. Two students did get out of the car and stayed a distance away from us so we could take their picture in front of the Day Creek building,” said Mrs. Schemenauer.

DCIS staff members are trying their best to balance safety and while spreading happiness to our Day Creek community. The August Student of the Month drive-thru was just the beginning of what hopes to be many more heartwarming events to come this school year.