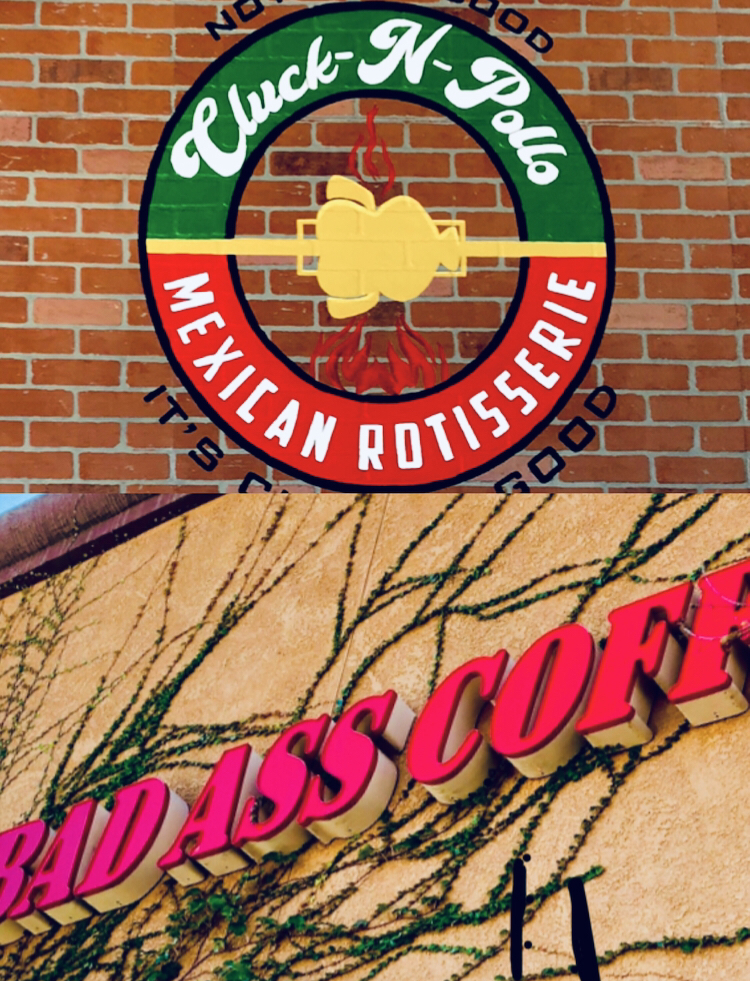 Do you accept this profanity? (Image credited to Tori D.)

Do you accept this profanity?

In recent months, a new shopping plaza has popped up near Day Creek and with it, the restaurant “Cluck-N-Pollo” with its controversial slogan. In addition, we wrote about another restaurant that features profanity in its title. The Howl looks at students’ opinions and the stories behind the restaurant.

Have you ever noticed Bad A** Coffee, you know with the word a** in it? Or seen storefronts that say in bold words S*!T. Why? For attention? Publicity? Or for something much bigger?! It’s likely for all of those exact reasons.

Stores such as Bad A** Coffee and Cluck-N-Pollo include or reference to profanity words.  They aren’t alone, as other restaurants and stores are doing the same. Ever notice that the restaurant Dog Haus has a sandwich called the ‘Bad Mutha Clucka’ or Punch Bowl Social has even made the ‘Sheetload of Nachos’? What about all the kids, including you and me, who look at these signs and words every day?

Cluck-N-Pollo’s owner, Celia Mercado, says that their name is based off of chickens going “cluck cluck cluck.” Yet their motto is: “It’s not just good, it’s cluckin’ good.” There is no direct profanity within the name but people can easily assume that it plays off of the ‘f-word.’ Mercado, “I had been doing it under a different name and my son came up with the name Cluck-N-Pollo because I think my son said they go cluck cluck cluck,” and later added, “Cuz it’s not just good, it’s cluckin’ good. So it’s just like clucking to go with our logo.” Mercado stated that they took a pause in recognizing how kids could see their name, but still chose it since it was catchy, and no one would forget it.

What about Bad A** Coffee? They use profanity straight in their name in big, bold letters. Bad A** Coffee originated from Hawaii “where the locals enjoyed freshly roasted and brewed Kona coffee that was grown and harvested nearby.” According to the owner, Dave Wagner, “They are talking about the donkeys. They’re called the bad a** donkeys. They carry the beans and (different types of crops) out of the hills. So that’s where we got the name from. From the donkeys themselves.” Because the donkeys helped Hawaii’s community thrive, they use their butts in the name to help remember how they have helped people in the villages. Wagner said a few have commented on the name: “Yeah, we have had a few, but after we explained to (them) where the name came from, we’re talking about the donkeys, everything (seemed) fine.” The fact that people have asked about it appears to show some level of concern, which might mean that they are possibly looking out for others’ children or their own.

Lynne B. Kennedy, the Mayor Pro Tem of Rancho Cucamonga City Council, met with the Howl to provide the city’s perspective on business names. “We do have policies that determine or relate to these types of business’ however, not any policies that are for play on words…I am discouraged in general about that type of freedom of speech. I understand it and it’s protected and as long as it doesn’t get to the point of being vulgar or profane, people can use them.” We followed up on Kennedy to ask if Bad A** Coffee and Cluck-N-Pollo are vulgar or profane? She said, “Kennedy expressed that she cares deeply about the city and making it a better place, and by seeing these store names, she is displeased to see how they are presenting themselves. “I think our choice is we don’t patronize one that we find offensive.”

The Mayor of Rancho Cucamonga, Dennis Michael, also visited Day Creek Intermediate. The Howl asked Michael some questions about restaurants and businesses using profanity or euphemisms within their names. “The people have the First Amendment and the freedom of expression of communication and putting a sign-up and naming your business something,” said Michael. He expressed a hope that store owners were “more mindful and more caring and compassionate towards others.” Michael agreed with Kennedy, as neither like the names being out in the community. They feel “it is successful, but I don’t like it. Really, we don’t have any policy that says you can’t name your business whatever you would like to name it. You have the freedom of speech, the freedom of expression.” Michael stated that he was disappointed that people would want to represent themselves and their stores this way.

During the interview, Michael’s words were,“I can promise you this much I’m going to talk to the city attorney.” he said this is what he could do  “I am going to check with our city administrators and if there is something we can do to regulate what a business names itself.” The Day Creek Howl followed up with the Mayor, L. Dennis Michael, and asked if the city attorney could make a change to the restaurant names. He quoted that, “There is nothing we can do. If Bad A** Coffee, and some other things, they have the right to name their business whatever they want to do. It is under the First Amendment of the Constitution of the United States. The freedom of expression, freedom of speech and if they want to name their business something, the city cannot get involved, otherwise would be in court.” As you can see, Michael said that there is no possible way the city could do anything about this. It is just up to the owner of the business on what they want to name their business because of the First Amendment.

The Mayor and Lynne B. Kennedy both expressed that although it isn’t against the law to have profanity or euphemisms in stores and businesses, they’re still disappointed about how kids will see and learn from what’s seen in the community.

Neither Cluck-N-Pollo or Bad A** Coffee voiced a problem with kids seeing or understanding the swear words in their signs and names. However, Mayor Michael and Lynne Kennedy both expressed sadness that the community’s businesses would do what they are doing. Overall, no one can do anything about curse words in business names because of the First Amendment freedom of speech rights. “…it is successful, but I don’t like it. Really, we don’t have any policy that says you can’t name your business whatever you would like to name it. You have the freedom of speech, the freedom of expression,” Michael said.

The Day Creek Howl recently wrote an article about profanity and euphemisms seen in local businesses. For example, in Rancho Cucamonga alone, we have Cluck-N-Pollo and Bad A** Coffee. While the profanity in Bad A** Coffee is obvious, you might be wondering about Cluck-N-Pollo? Well, Cluck-N-Pollo’s marketing phrase is “It’s not just good, it’s Cluck’n good.” The word “Cluck’n” is an obvious play off the f-word. Cluck’n, F’n. See what they did?

In response, the Howl interviewed several Day Creek students regarding their opinions about these local business names and the possibility of younger children seeing and reading them.

“I feel like that’s wrong. Parents shouldn’t support it by going to places like that,” said Francesa L. Pete D. added, “I think it’s not a good environment because kids shouldn’t be exposed to that language at such a young age. And [instead] be matured into it. So, I feel like it’s a bad idea.

Other students didn’t see a problem with the stores’ names.

“I don’t (really) care because, first of all, it’s not illegal. Second, it’s actually not directed towards anybody. So it’s not offensive. (Lastly), since they’re not actually saying the f-word, it’s not technically cursing,” said Zen L.

“It’s bad because children like that shouldn’t be speaking in that way. But’s it’s also good because they’re getting prepared for the real world. Because people do speak like that,” said Bruce N.

Finally, the Howl wanted to know how kids would respond if they were parents and heard their children repeat the words seen on a local business. As adults, would they discipline their kids?

“I’d feel pretty offended that they would put (up) something like that, where my child could see it. And I would want them to take it down as soon as possible,” said  Francesca L.

“I wouldn’t care because technically they’re not reading the f-word. And especially when they’re small. They wouldn’t be understanding (at that age). (Overall), it’s not my problem,” said  Zen L.

“I would tell them what it means and then after that, I’d explain to them how it’s a bad word and that they shouldn’t be saying it. I don’t want them saying it around their friends and influence them to say that,” said Arianna P.

“I would find out the reason why they said it, (though) it’s their brand (and) they’re trying to make money. (So), I wouldn’t really say anything,” said Matthew R.

Students shared a variety of answers, the majority saying they personally didn’t like having to see profanity out in the open. Yet we all have our opinions. People in our community may express their thoughts by asking to speak with a manager or owner, or buying that taco or cup of coffee from a competitor. Ultimately, everyone has a right to their own opinions and can respond their way, as long as they do so with respect.